Posted on October 9, 2013 by mikewindley 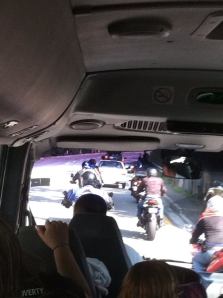 Police and motorcycle escort to project.

Getting a head start on the day two report, I haven’t done the Day 2 “devotional”, but it does ask the question again, “What ONE WORD best summarizes this day for you?” The answer so far would be, “wow.”

Today we went to a Compassion “project.” All of Compassion’s projects are connected with a local church. This is really a strength of Compassion, and also a strengthening tool for the local church. Since the churches help find the children and facilitate the projects, it helps to build the churches credibility in the community by providing such a powerful service. Compassion offers the churches an opportunity to serve the communities with not just the good news about Jesus, but also the ability to build a bridge into people’s lives by meeting real needs.

After the police escort, we arrived at the project to the cheers of about 300 people, 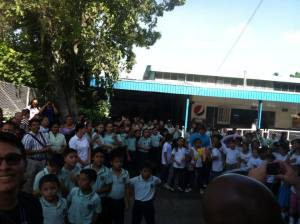 mostly whom were children. The church sponsoring the project also has a Christian school, and most of the kids in the school are a part of the project (sponsored children). We were welcomed like rock stars and ushered to the sanctuary where Pastor Daniel gave a short message and kids performed numerous dances, and songs, and more. You might note in the picture that all the kids look really normal – well dressed, clean, happy. (I’ll come back to this in a bit.)

We toured the school, and learned about how the Compassion funds were being used to support these children. We were even welcomed to look at various files of different sponsored children to see all the records of what support the children were receiving.

After lunch, we went to a home of one of the sponsored children.

This was really the big “wow” moment. Like I said before, at the school, all the children, workers, teachers, etc., looked just like you and me. But going into the home is where you really see the poverty. In this case, I’d have to say the condition of the home was worse than what I typically saw when I lived in Mtwara, Tanzania. The home was clean, but there was very little furnishing. The home was of a little boy named Allen. Allen, 7, with red hair like my son’s, lived there with his mom, sixteen year old sister, thirteen year old brother, mother, and grandfather.

The ceiling of the home was corrugated (sp?) metal/tin. Much of which they told us was provided by the church and Compassion project. There was some electricity – they had a refrigerator and stove, and a light or two. But electrical wires ran exposed along the walls. The floors of course were concrete, and the roof leaked when it rained.

All of the family were well dressed. They looked so sweet and happy. The mom grew up in this same home, and I asked her about her favorite childhood memory. She shared about going up the hill to an open field to play baseball. Unfortunately, she said that her children were unable to do this as the crime and violence were too great now and her children couldn’t roam free as she did.

I’m certain that I cannot adequately describe the heartbreak of their living conditions. I have so much. They have so very little. And what they lack the most is hope. There is little to no hope that they will see much change in their lifetimes. But Compassion is making a difference.

Mike Windley is Lead Pastor of The Bridge Community Church in Morrisville, NC.
View all posts by mikewindley →
This entry was posted in Being a Dad, Family, Helping Others, Making Sense of Faith, Missions, Money, Parenting. Bookmark the permalink.